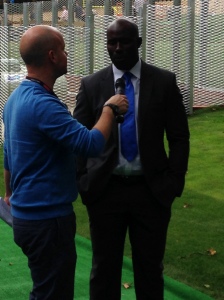 This summer the NFL Commissioner, Roger Goodell, announced that a London franchise will happen in the next few years rather than decades. This is a hot topic with UK-based football fans who seem hungrier than ever for gridiron. Just look at the demand for tickets for this year’s International Series. Wembley hosts three games this autumn, the first of which takes place this weekend, and we snapped up tickets within a couple of weeks.

“It doesn’t matter who’s playing, they’re into the game”

So what do the Yanks make of it all? How do they feel about us Brits taking away one of their franchises? The former Super Bowl MVP, and two time Champion, Terrell Davis doesn’t have a problem with it. We caught up with him at the Raiders’ training camp in Surrey and asked him if he was impressed with the support for his beloved game over here, “Absolutely. You don’t think about the boundaries for American Football whilst you’re over there (USA) and how far it extends until you actually go some place and it’s actually being talked and being played there” said the former Broncos RB.

Davis added, “I was walking down the streets and it was nice to see people talking about football and the game this Sunday. It doesn’t matter who’s playing, they’re into the game and that’s always good”.

“You talk about jet lag, I would be interested to see the team that’s over here play 8 games in the States”

Davis said that it looks like a London team will happen, but questioned the impact the travelling would have on them every other week of the regular season, “you talk about jet lag, I’ll be interested to see the team that’s over here play 8 games in the States. It will be tricky, but what we’ve learned is that players are very resilient and they learn how to adapt to the environment. So whether it’s here or over there, you’ll probably hate the week but once the game starts nothing matters”.

How do you resolve the issue of all that travelling? Davis has a solution – set up a whole new division with four UK teams! “The possibility of four teams over here is a solution. You put four teams over here”. His theory being that the teams would play more games over here, therefore only having to travel to the States a handful of times in the season.

But is that what we want? I think part of the romance is being able to see likes of Rodgers, Brady, Manning and Megatron in our own backyard.

Until that happens we’re thankful to NFL UK for bringing us more games this year. It looks like we’re going to be treated to three, if not more, games in 2015. We’re ready for it and Davis certainly thinks so too, “The support is here. Everything that’s needed to bring a franchise here seems to be here, so the next step is to get the actual team here.”