So with the opening weekend of the season now in the books, we can finally reflect on the finale of the pre-season treat, Hard Knocks.

It’s been a long time since the Greatest Show on Turf, and never has there been a franchise so entrenched in mediocrity than the Rams – as soon as owner Stan Kroenke signalled an intent to build a new stadium in Inglewood, the writing was on the wall for the St Louis experiment – the Rams were heading home.

So, the Rams secured the move that several other franchises were coveting, and returned to Los Angeles 22 years after they had quietly left the city in 1994. With the move, they coughed up a kings ransom to the Titans in exchange for the first pick in the 2016 draft – the L.A. Rams would now begin their 2nd life in Southern California with a #1 pick QB under centre… or would they? 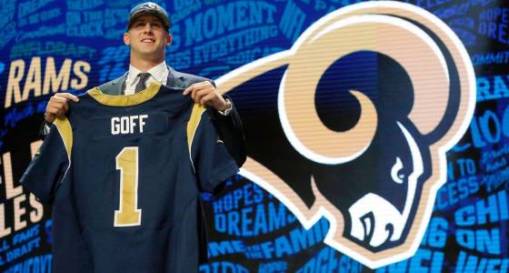 So, this brings us up to where this season of Hard Knocks started. The Rams had been an obvious choice from the outset, with the NFL clearly invested heavily in this move to a major untapped market. Despite the Rams mediocrity over the past decade, there were quite a few pro-bowl calibre players on the roster (and a fair share on nut-balls that Hard Knocks always likes to gravitate towards), and Goff would be the icing on the cake.

The series opened with stylised credits, showing Todd Gurley running past the city landmarks (a 20+ mile run if this was filmed without edits); but this highlighted that the city of Los Angeles would be the star of this show just as much as any of the coaches or the players.

As is standard fare with Hard Knocks these days, some characters shined such as Eric Kush (who would eventually be cut and end up starting the season with the Bears) and Strength & Conditioning coach Rock Gullickson; whereas some couldn’t help but annoy – Todd Gurley & Tavon Austin please step forward (or back, out of earshot preferably).

It seemed as the series went on, the producers found the Rams just as bland as fans have, and were forced into following threads like the mermaid loving, dinosaur nay-sayer William Hayes until the point was driven too deep. Yes, he’s a kook, we get it.

Throughout the series we got to see a lot of Head Coach Jeff Fisher; producers seemingly inspired by the coverage of Bruce Arians in Amazons summer hit “All or Nothing”, we got to see the hard and the soft side of the man. While his handling of the Lamarcus Joyner situation in Episode 5 was nicely done, between the crazy new contract he gives Tavon Austin, and the attention his team gives to his warning on golf carts, he ultimately failed to cut the figure of a Head Coach who could take this team to the post-season.

And the fate of the #1 pick, Jared Goff? Well, he was in his civvies this weekend, watching the game. Apparently he’s not yet ready for the big time – the question should really be, are the Rams?

To paraphrase Fisher himself, unfortunately this whole season of Hard Knocks felt like some 7&9 bullsh!t.