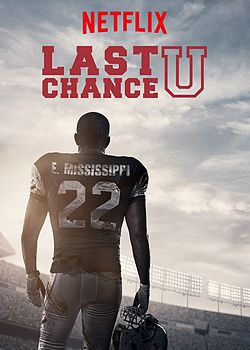 Last Chance U is the story of the 2015 Eastern Mississippi Community College Lions.

The Lions are no ordinary team, having won 3 national championships under head coach Buddy Stephens in the previous 4 years.

They are also extraordinary in that they accept student athletes that no one else wants – a team of misfits and outcasts. And they don’t just beat everyone – they thump everyone. To make it to a National Championship, you need a perfect season with the biggest point spread. It’s because of this that they are also the most hated team in the state.

If you, like us, are mourning the end of the recent “All or Nothing” Amazon series, then this is the wrong place – you’ll have to wait for the upcoming “Hard Knocks” series for an inside look at the world of professional athletes. Last Chance U has more in kin with  Friday Night Lights, or the superb Oscar winning documentary Undefeated.

Outside of the draft, there is little coverage of top College football in the UK, so it’s likely few are aware of the Junior College system. These colleges offer students a 2 year, post-high school education. Most Ju-Co students will receive a vocational associate degree and head off to work, others will go on to a bigger University to complete a full degree. Ju-Co athletes meanwhile, are looking to get a scholarship at a Division 1 University that for some reason eluded them in previous years. Top talents like DJ Law and Ronald Ollie didn’t have the grades, while QB John Franklin III transferred from Florida State for an opportunity to play football.

Set in the rundown backdrop of Scooba, Mississippi, we meet the young men who hope the 2015 Ju-Co season will provide them with one final chance of a pro-football career. They need to make the grades, and win another National Championship to gain the attention of the big College scouts. Don’t expect to love these kids – they are equally frustrating and obnoxious as they are talented. Don’t expect to love Buddy Stephens – he is as explosive and divisive as he is ambitious. But you will fall for the story, especially as the show reaches the 3rd act which is teased in the opening scenes of episode 1.

The real star of the show is Brittany Wagner, the college Academic Advisor who has to chase these athletes around campus to ensure they make class, make grades, and make the field. Just as Coach Taylor’s wife Tami was the star of Friday Night Lights, Wagner is the heart beat of the College, and the only reason Coach Stephens is able to field a full roster each week.

The production quality of the show is superb, with the EMCC marching band providing a poignant sense of local community. The features on the people of Scooba are inspired inclusions; with accents so thick that half of the series requires sub-titles, seeing behind the scenes at Scooba reinforces just how important this school is to a deprived area of Mississippi (although one of the featured Scooba residents does seem to be an Eddie Murphy character from Coming to America – see if you can spot the resemblance!). What the series does miss though is the other side of the College sports system, how the school is able to afford such top class facilities in such a poor area of the country – often it seems the Lions wear a sparkling new uniform in every game, which contrasts badly with how deprived the town of Scooba is, and the social background of most of the players.

Overall, Last Chance U is a fascinating piece, which grows the recent trend of extremely high quality documentary series on the game of football. After watching All or Nothing, this series is essential watching to see how difficult it can be just to make it to the top.

You can find Last Chance U on Netflix