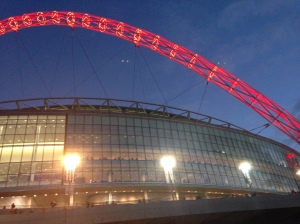 NFL UK announced on the weekend that the two October International Series games will have a lunchtime kick-off. The early kick-off was trialled on the Detroit Lions vs Atlanta Falcons game this season and it proved a success.

Huge crowds gathered at the tailgate from as early as 9:30am. Channel 4 bought into the occasion with Tim Lovejoy presenting Sunday Brunch outside Wembley Arena.

These kick-off times are exclusive. They’re a symbol of how far the game has grown in the UK. No other game will be broadcast in the States whilst the two teams slug it out under the Wembley arch.

The London games have become a unique occasion. Players and staff have enjoyed their experiences over here and teams are keen to come. The Kansas City Chiefs don’t have to head over. They only get eight home games a season and they sell out each and every one. But they know there’s a market here and they want a slice of it.

UK fans are some of the most devoted in the world. For three decades we’ve stayed awake until the early hours of the morning to follow the game we love. These early kick-off times allow us to experience games like the Americans do. Traditionally it’s a sport played on a Sunday afternoon. Fans flock to the stadium for a spot of lunch at the tailgate and then enjoy three hours of exhilarating football.

The early times also makes the sport accessible for a wider audience. Families can watch it on television sets without worrying about getting the children to bed on time. Children, the fans of the future, are able to see more of the sport than the “old guard”. It means the sport can grow this side of the Atlantic and demand for our London franchise will remain strong.

The NFL will keep testing us until they’re certain that every stone hasn’t been left unturned. What they’ll find is that UK fans are ready for our team.