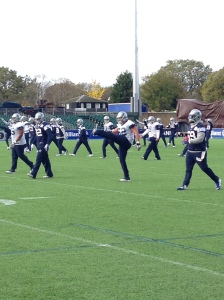 Jack Crawford is enjoying showing off his native city to his Dallas team mates. Speaking on Friday, he admitted that the Cowboys’ schedule in the UK has limited how much his team could see, but he did take his defensive line out for a meal on Thursday.

“I’m not a fan of English food, but if you know where the top places are there’s no doubt our cuisine is far better than theirs”, said the former Oakland Defensive End.

It looks unlikely that Crawford will play as he remains sidelined with a calf injury.

When asked who he thinks the potential London should be called, the Londoner said “It’s got to be the London Royals”.

We’ve seen three British players return to our capital with their respective teams in the last two years. With the sport becoming increasingly popular in the UK, any dreams of a British superstar in the NFL look they might come true.